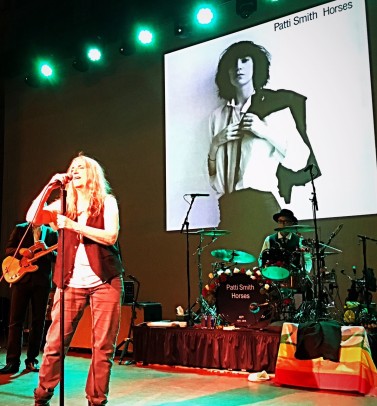 On Monday night, I worshipped at the altar of 70-year-old punk rock icon Patti Smith and I got religion. The entire evening, including how I ended up at the concert, was divinely superhuman. My wife and I were in a low spot having recently moved from San Diego to Pittsburgh – missing our friends and tired of the cold weather. I decided the best remedy for the Monday blues was to get out of the house. My brother and his wife were going to see Patti Smith, and I always dug her music, so I decided to get tickets.

The concert was sold out so I sought scalper tickets on Ticketmaster, StubHub, etc. and there were good seats available but the $20 per ticket handling fee plus $15 delivery fee turned my stomach. Surfing over to Craig’s List I found a listing for good seats. I texted the seller. A deal was struck and for $150 I had scored a pair of fourth row seats – I just needed to arrange to meet the seller. My wife Jan, a former manager at Ticketmaster, hit the ceiling. Was I crazy thinking I could buy legitimate tickets from a stranger on Craig’s List? Naively, I texted the seller asking if they were “legit.” The seller texted back, “no offense, but if someone was selling you fake tickets, would they tell you?” Point taken. Nevertheless, this inquiry instigated a text discussion from which I gleaned that the seller and her partner were travelling from city to city following Patti’s Horses tour, and that a few girlfriends were supposed to join them but couldn’t make it. She texted me a photo of her with guitarist Lenny Kaye and we struck up text friendship (lesbian connection made!).

After meeting Shelly at Ali Baba restaurant to complete the transaction, we headed to the grand old Carnegie Music Hall.  From the moment Patti stepped on the stage and belted those first words, “Jesus died for somebody’s sins but not mine…” I was mesmerized. Early on, Patti shared that her body sensed the oncoming Nor’easter, making it hard for her to breathe. She was sure her son noticed. She assured us she was perfectly healthy and would carry on.  A few songs in she waved the audience down to the stage. I rushed to the front behind Shelly.  Patti sung her way over and knelt in front of us, head down, just inches away. Perhaps she recognize Shelly from other shows. The low stage put us at eye level as she belted out her lyrics, entranced in song. Then she looked up and caught my eye and reached out for my hand. As my hand grabbed hers she began to stand up with my help. I used all of my might to steady her, sensing her need of my strength to carry on. She didn’t ask, she just trusted that I wouldn’t let her fall.

Nothing shakes me to my core more than an artist showing vulnerability – willing to expose their heart and soul and place trust in total strangers to take care of them. Patti Smith trusted the audience to give her the strength she needed to carry on Monday night and we did not fail her. I felt her connection to me several times. During “Break It Up” she put the mic in front of my mouth to sing the title line. During “Because The Night” I could see her watching me sing it with enthusiasm – she again sent the microphone my way. I’m not so naïve to think I am the only one she connected with – I witnessed it time and time again during the show and I saw Patti’s energy grow.

At 70 years of age Patti had all the passion, fury and voice necessary to bring her 1975 album “Horses” alive in a refreshing new way relevant to this generation. She urged us to resist, shouting that Donald Trump is a product of her generation, but so is she and “we will not behave.” She was honest and funny — admitting she refused to sing along at concerts in her youth and hated when performers asked the audience to comply. But now she understands why: “you’re my concert.” She finished her second encore by shredding her electric guitar – figuratively and literally. She pulled out every string and then walked to the front of the stage and handed the last string to a 10ish year old boy in front of me. She pulled a handful of guitar picks and placed them in his hand as well and closed his fist. “You are the future.”  His face beamed as she unleashed her power in him. He turned and fist pumped into the air.

I woke up the next morning still vibrating from the experience. I had worshiped at the altar of Patti Smith and I got religion.

“I wanted a perfect ending. Now I’ve learned, the hard way, that some poems don’t rhyme, and some stories don’t have a clear beginning, middle, and end. Life is about not knowing, having to change, taking the moment and making the best of it, without knowing what’s going to happen next. Delicious Ambiguity.” This is one of my favorite quotes – spoken by the incredibly talented and funny Gilda Radner.

Being a serious planner (I love spreadsheets!) since as long as I can remember, it has been a process learning to embrace the uncertainty of life. Realizing I was a lesbian at age 21, being diagnosed with breast cancer at age 40 and falling into the improv comedy scene at age 49 have all helped. This photo is from one of my all time favorite improv scenes (I’m in the striped jacket). My scene partner Jen and I are two pilots messed up on Ambien trying to land the plane. It was a beautiful scene where we all trusted each other and found ourselves in a magical mind meld. It is impossible to convey the freedom you feel when you let go of needing to know where a scene is heading and just let it unfold as it happens in the moment.

Life is an adventure…and the current phase of that adventure has landed me in Pittsburgh, Pennsylvania. My wife Jan and I settled into a 1910 Colonial Revival home we remodeled in December 2016. It is located in a lovely neighborhood of historic homes called Regent Square adjancent to the beautiful and abundant Frick Park. We moved here after many years in San Diego (50 for Jan, originally from Beaufort, SC; 30 for me who grew up in Belle Vernon, PA). We are  semi-retired – planning to remodel and flip historic homes while also pursuing whatever other endeavors strike our fancy. For me, it’s likely to be improv comedy, acting and writing/producing (sketch, musicals, short films). For Jan, it’s TBD…stay tuned and you may find her behind a pottery wheel or laying tile or serving as docent at a local conservatory.

Are we done selling real estate? Apart from our own real estate investments, we will no longer represent clients in real estate. However, we have a growing network of competent agents to refer our friends to. Having had our share of bad experiences with incompetent agents in the past, we know how important it is to be well represented.

More updates to come as our adventure unfolds….